Begun in May 2019 a dozen graduate students from the college's M.A. professional or strategic communication programs, participated in the inaugural online class and field trip. Here are a few of their stories or reflections.
About the Trip
A feature-style story about how the experience began by graduate student, McKenzi Morris (summer 2019).
A Military Story
A sports media feature story informed by a trip to the Air Force Academy (summer 2019) by McKenna Garrison.
Branding a City
A developed area of student interest, how to brand the city, by Brianna Maldonado (summer 2019).
Below is a video collage of the experience from Erika Trevino's perspective (summer 2019).
Testimonials or reflection pieces written by the students as indicated:

The Stages of My USOC Journey

Growing up as a gymnast, I have always been aware of the Olympic movement and the willpower, training, and dedication level it takes to compete on the grandest stage. I remember watching Carly Patterson win the women’s all-around title in Athens in 2004 at seven years old, realizing she was just a sixteen-year-old from Dallas, Texas, and desiring one day to have my chance to compete at the Olympics Games as well. I remember training alongside other trampoline athletes who were older than I, who were competing in the 2008 and 2012 Olympic trials. I remember how badly I wanted that for myself in that moment and the hours I put in to work towards that end goal. Reflecting back on these moments of my childhood and watching athletes train at the U.S. Olympic Training Center in Colorado Springs, I realize the differences in our mindsets, journeys, and desires for ourselves which ultimately led them to the Olympic and Paralympic Games and me to exactly where I am at now. When I first began high school, I began discovering passions that were outside of my sport. I ended up giving my time equally to these passions and extracurricular activities and to gymnastics, even choosing competitions for the academic clubs I was involved in over my trampoline competitions. I remember getting to the end of my senior year and struggling very much with the pressure I felt in continuing gymnastics, the emotional toll comparison and the competition of it all had on me and making a decision to pursue my education and college experience, retiring from elite gymnastics. While I was no longer a part of this sport that was so much of who I was, I was fortunate enough to receive a full scholarship to Texas Tech University and free from the financial burdens of paying for school, was able to give myself completely to new passions, interests, organizations, and experiences. While I’ll never stand atop the Olympic podium and hear the national anthem, I know the path I have taken is the right one for me and this week at the USOTC, and the emotional stages it put me through, has shown me that.

When I first arrived at the OTC and our group was given the V.I.P. tour of the facility, there was no other emotion I could feel besides wonder and amazement. I was amazed continually throughout the week of the technologically-advanced equipment and resources the athletes of Team USA have available to them in order to reach that gold medal they spend their whole life working for. I remember hearing about the athletes training regimen and exercises and being taken aback by just how much they push themselves to their absolute limit. Leaving the tour, I began to experience feelings of defeat rooted out of comparison for my ex-Olympic journey and the athletes at the facility. I began to question myself and if I had made the right decision at the crossroad in my life by choosing school, travel, and new relationships over my sport. I began to feel defeated that I couldn’t recall a time when I had worked this hard for anything, and had dedicated this much of myself to a purpose, cause, or effort to be the very best (this feeling was reemphasized upon visiting the United States Air Force Academy).

However, in the middle of this feeling of defeat, the mission and goal of the United States Olympic Committee shown through: “To inspire all Americans.” I remember walking outside the OTC, reading stories of athletes who suffered great injuries and setbacks and came back to achieve their goals. Athletes who were born with disabilities but refused to be seen as disabled and worked to be viewed rather as an elite athlete. Athletes who failed to be the top of their original sport but were redirected to other sports because of their unique talents and ended up thriving in their new choice. I sat down in my room that night and wrote a list of things I wanted to give my all to this next year, things I have wanted to accomplish for a while, but have not because of excuses on my end. My experience at the OTC ultimately allowed me to refocus and set goals for myself.

Walking into the room of the collection of Olympic medals and torches carried at each of the games, I remember my breath being taken away. Getting to see all of this in person gave me an enormous sense of amazement and pride in Team USA. These medals are what athletes spend their whole lives working towards. These medals are what the USOTC’s ultimate purpose in partnering with the athletes to help them achieve their dreams. I am proud of how our athletes represent us year after year as one of the most athletically dominant nations in the world, and I am still processing and reflecting on what my medal will be in this life. What I will give all of myself to achieve, and I am thankful for the unique experience of the archive tour to help force that needed self-reflection.

Overall, I feel honored to have had the opportunity to participate in this experience. I feel honored to have slept in the same beds, eaten in the same cafeteria, worked out in the same facilities, and walked the same grounds as some of the greatest athletes of our time have. The stages the OTC put me through that I didn’t realize would happen coming into this experience: wonder, defeat, inspiration, pride, and now curiosity of what the future will hold. What my impact will be and what I can do day by day to achieve the goals I have set for myself and want to accomplish. I’m honored to know the inner-workings of the USOTC and the USOC and I am hoping one day my path will cross once again with theirs. That I will be able to work for Team USA, an NGB, the USOC, or the Olympic movement in some way. I feel more strongly about the effects that the Olympics has on people across the world, young and old, after this week. The way it inspires and empowers those to achieve Olympic dreams and just dreams in general.
A Testimonial by Laura Zamora 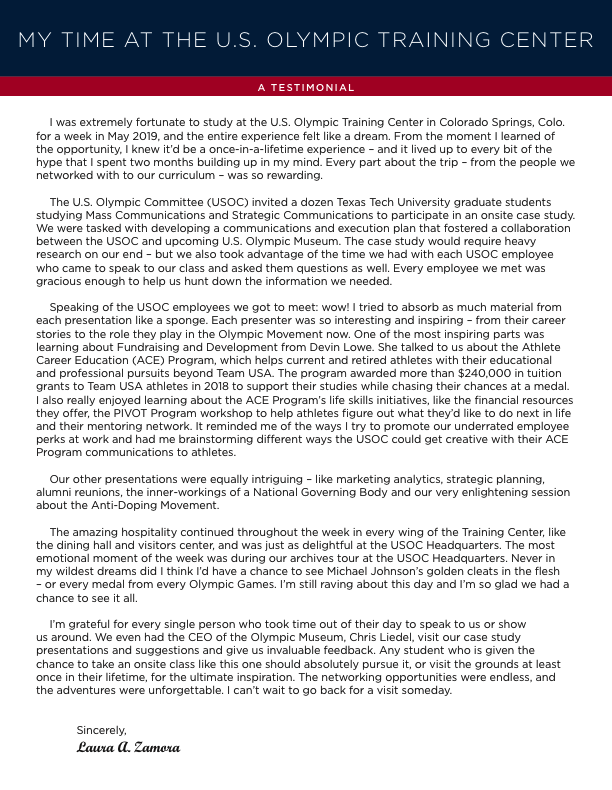